May 14, 2018 the ceremony of awarding the winner of the contest for the best symbol of the GMP-conference was held. The welcoming speech was delivered by Vladislav Shestakov, the director of the FSI “SID & GP”, noting that the scale of the event is increasing every year, the cities are actively claiming that the event will take place in their region.

“Of course, we understand how important it is for us to note the contribution of the regions to the development of the event. That’s why we came up with the idea to create our own symbol of the GMP-conference, which will be solemnly presented to the leadership of the city hosting the event”, Mr.Shestakov commented.

Throughout March, representatives of various professions, from designers to engineers, competed among themselves in creating the draft symbol of the All-Russian GMP conference – the main event in the field of compliance with the GMP pharma standards.

In total 24 people took part in the contest and over 9 thousand people from all over the country voted for their work. The winner of the contest is Elena Kochenkova, whose work gained 2360 votes. As reported by Elena, she did not believe in the victory at all, but decided to take part in the contest because for sports of it. “When they called me and told me that I won the main prize, I did not believe it, especially since it happened on the eve of April 1st. Today I was convinced that this is not a rally, but a real victory”, says Elena.

The future symbol and cup of the GMP conference, which will become a city-to-city transition, combines the scale of the event, expressed in the image of the globe, and the knowledge that the book symbolizes.

The organizer of the competition was the Corporate Communications Center  S-GROUP and Olga Sobchenko, managing partner of the company, presented Elena with the main prize – the Apple iPhone X smartphone.

You can familiarize with work of the winner of competition, and also with works of other participants on a site. 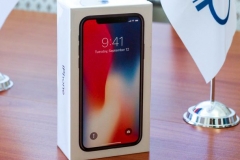 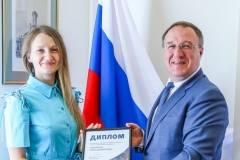 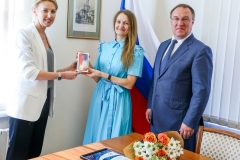 International regulatory convergence discussed in India
Vladislav Shestakov, Director of the FSI “State Institute of Drugs and Good Practices” of the...
9/21/2022

Regulation should be a two-way road
Representatives of various regulatory agencies spoke at the VII All-Russian GMP Conference with international participation...
9/16/2022
All news
Schedule of events
2022 © News and other data on this site are provided for information purposes only, and are not intended for republication or redistribution. Republication or redistribution content is expressly prohibited without the prior written consent of Division for International Cooperation and External Communications FSI «SID and GP».