Front page » News » 2017 » Speech at the round table conference «Contract manufacturing of pharmaceuticals» at the 19th International exhibition of equipment, raw materials and technologies for pharmaceutical production Pharmtech & Ingredients 2017

Speech at the round table conference «Contract manufacturing of pharmaceuticals» at the 19th International exhibition of equipment, raw materials and technologies for pharmaceutical production Pharmtech & Ingredients 2017

On  November 22, 2017, State Institute of Drugs and Good Practices took part in the round table «Contract manufacturing of pharmaceuticals» as part of the 19th International exhibition of equipment, raw materials and technologies for pharmaceutical production Pharmtech & Ingredients 2017.

Alexander Kuzin, NovaMedica Direcor General,  moderated  the event. He highlighted the relevance of contract manufacturing in Russia. Anna Plesovskikh, Head of External Communications Department of the State Institute of Drugs and Good Practices, presented the analytical data on contract manufacturing in Russia as of the first six months of 2017, prepared by the Institute’s Center for Economy and Analysis:

«An important element in today’s cooperation is contract manufacturing (using outsource manufacturing capacity with due technological standards and quality control of customer production). Its value is approximately 23 billion rubles, 80% of which  are foreign companies’ orders for location of production at Russian sites. The remaining 20% is the cooperation of Russian companies with domestic stakeholders. In the first semester of 2017, 67 foreign companies have located their pharmaceutical production at 31 Russian sites. The share of top five companies comprises 62%, which is a sufficient amount but still not as high as an equivalent rate of companies locating contract manufacturing at their capacities (85% of the volume accounts for top 5 companies). It turns out that demand exceeds supply at the moment. Nevertheless, there are alternatives, for instance, purchasing of a company or building one from scratch. Almost 20% of production volume accounts for localized products, a third of which is produced on Russian capacities during the first six months of 2017.»

Natalia Chadova, Рead of the Department for Pharmaceutical Production Inspection, spoke about the main deviations that Inspectorate encounters while фгвшештп contract manufacturing.

Presentations of SID&GP experts were followed by those of the pharmaceutical market participants; in particular, they presented the clusters and pharmaceutical sites vision of work on contract manufacturing. 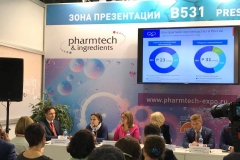 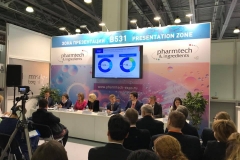 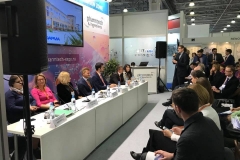 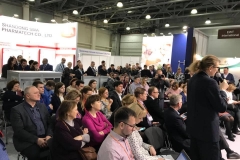 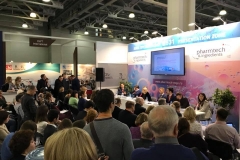