On December 14, 2017, the official meeting of the leadership of Federal State Institution “State Institute of Drugs and Good Practices” of the Minpromtorg of Russia was held with representatives of the Department for Medicines Supply and Medical Equipment under the Ministry of Health of the Kyrgyz Republic.

During the meeting there was a discussion on the forms of interaction and bilateral communication, prospects for cooperation within the framework of the united Eurasian economic space. The Kyrgyz side fervently supported the initiative of FSI “SID and GP” to create a permanent working group on EAEU pharmaceutical inspection under EEC, as expressed in the protocol of the 48th session of RG in EEC, that took place on December 12-13, 2017.

Besides that, the representatives of Kyrgyzstan confirmed their interest in participating in the III All-Russian GMP-Conference with international participation: “Russia and World. Management of the pharmaceutical market growth potential”, which will be held on August 27-29, 2018 in Kazan, the Republic of Tatarstan, within the framework of which it is planned to discuss the supranational rules of the EAEU GMP.

Also during the meeting the issue of participation of Kyrgyzstan’ representatives in the GLO WHO training program in April 2018 in Moscow has been discussed, as well as the prospects for interaction of joint educational programs on training and professional development of inspectors. The official signing of Memorandum on Cooperation between FSI “SID and GP” and the Department for Medicines Supply and Medical Equipment under the Ministry of Health of the Kyrgyz Republic has become the meeting outcome.

«I am sure that the mutual exchange of information, joint educational programs, that we outlined in the framework of the meeting, will allow us to build effective processes in the field of harmonization of approaches to pharmaceutical production sites inspection on the territory of our countries», – highlighted Vladislav Shestakov, Director of FSI “SID and GP”. 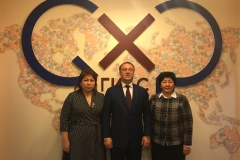 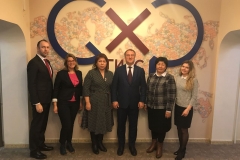 Delegation of the FSI “SID & GP”, Russian Ministry of Industry and Trade, paid tribute to the soldiers killed in the Great Patriotic War
Today, the delegation of the FSI “State Institute of Drugs and Good Practices”, Russian Ministry...
4/25/2022
All news
Schedule of events
2022 © News and other data on this site are provided for information purposes only, and are not intended for republication or redistribution. Republication or redistribution content is expressly prohibited without the prior written consent of external communications FSI «SID and GP».