On September 24, 2018, a delegation from the Foods and Drugs Administration of Yunnan Province visited the State Institute of Drugs and Good Practices of the Russian Ministry of Industry and Trade.

The guests were particularly interested in the structure of the Russian regulatory system of pharmaceutical circulation, as well as organization of licensing for Russian drug manufacturers and training of inspectors. These issues were discussed at the meeting with the leadership of the State Institute of Drugs and Good Practices, the participants exchanged inspection experience in supervision and release of new drugs on the market.

The hosts informed the CFDA colleagues about the Russian pharmaceutical market, regulation of pharmaceutical circulation in Russia and the Eurasian Economic Union, distribution of functions between the federal executive authorities and their authorized organizations, and the key aspects of inspections. Among others: establishment of a pharmaceutical quality system, inspection procedures, reports and outcomes of inspections (including those of Chinese manufacturers).

‘The People’s Republic of China has made great efforts to build a pharmaceutical quality system in pursuit of innovations. Establishment of a unified regulatory mechanism, quality control, pricing and antimonopoly activities will bring the regulatory system to a new level,’ – said Natalia Chadova, Head of the Department for Pharmaceutical Inspections and Evaluation of the State Institute of Drugs and Good Practices. ‘Undoubtedly, the exchange of experience with Chinese colleagues will be useful for both sides.’

Mr. Xing Yawei – Deputy Director General of the Foods and Drugs Administration of Yunnan Province – noted that this meeting was the first step in establishing professional contacts between representatives of the CFDA and representatives of the Russian GMP Inspectorate. ‘The regulatory approaches in the sphere of drug circulation in our countries are similar, and we are confident that further exchange of experience and best practices will help our countries to effectively develop cooperation in the pharmaceutical industry, including scientific development of new medicines,” he said.

‘Professional interaction with colleagues from China is one of the priorities for international cooperation of the Russian GMP Inspectorate,’ says Mikhail Morozov, Head of the International Cooperation Department of the State Institute of Drugs and Good Practices. ‘China’s position and experience in interacting with international organizations and professional associations such as WHO, PIC/S, ICH, and EMA are of great significance, and we have found many points of contact with the CFDA colleagues.’ 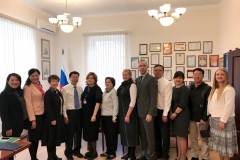 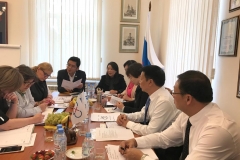 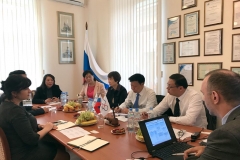